Globalstar Satellite Phones versus the IsatPhone PRO: Which is Better?

Posted by OutfitterSatellite on 7/31/2013 to Globalstar Satellite Phone

Is the new Inmarsat IsatPhone PRO a better alternative to Globalstar satellite phones such as the GSP-1600? This article compares them and discusses special discount offers for active Globalstar subscribers transitioning to Inmarsat.

We will also discuss some of the challenges facing Globalstar users in the future. Moderately priced but highly reliable alternatives for Globalstar satellite phones are analyzed, with an emphasis on the Inmarsat IsatPhone PRO.

A Brief History of Globalstar:

In January 2007, Globalstar filed documents with the SEC indicating problems with the S-band amplifiers on its satellites which were expected to lead to premature degradation of its duplex voice and data communication services. Many people are familiar with the SPOT Satellite Messenger which uses Globalstar simplex data services which were not impacted by the S-band amplifier problem. Unfortunately, the prediction of premature degradation of duplex communications proved accurate, and quality of service for voice and duplex data degraded substantially by 2008 and did not recover significantly until recently.

In order to quickly reduce the impact of the S-band amplifier issue, Globalstar launched its eight first-generation ground spare satellites in 2007 and began building 24 new second-generation satellites. By 2013, these second-generation satellites had joined the satellites launched in 2007 to form a new 32-satellite configuration. Globalstar quality of service improved substantially, and Globalstar launched new bundled-minute service plans reflecting its improved quality of service. That said, users with mission-critical applications for their satellite phones should carefully consider the issues below.

How Long Will The Satellites Launched in 2007 Last?

We know that the original first-generation satellites launched between February 1998 and February 2000 degraded substantially by 2008. Their effective lifespan was roughly 8 to 10 years. Now, the identical first-generation satellites launched in 2007 account for 25% of the current 32-satellite configuration. Without them, the current quality of service for Globalstar voice and duplex data cannot be maintained. As their lifespan comes to an end, more second-generation satellites must be built, launched, and financed to replace them. This is a significant hurdle, and the eighth anniversary of the 2007 launches is just a few years away.

Will Call Drops by Globalstar Satellite Phones Be More Common in the Future?

Is that still the case with the current smaller 32-satellite configuration? The maps below show Globalstar coverage as it stood a few years before the S-band amplifier issue and as it stands now. Remarkably, the Globalstar Primary Coverage Area appears relatively unchanged, even though considerably fewer satellites are available to provide coverage. Substantially maintaining the coverage area with fewer satellites was accomplished by spacing nearby satellites farther apart. Every choice has both benefits and costs. Lets go back to the explanation of path diversity technology. Now when a satellite carrying an ongoing call happens to move behind a mountain or a building or a tree, it is significantly less likely that there will be another satellite near enough to take over the call. Our experience so far in 2013 is that users operating in mountainous or heavily forested areas are most likely to be impacted by this issue.

The map marked BEFORE shows Globalstar satellite phone coverage for voice and duplex data some time before the announcement of the S-band amplifier difficulties in 2007. The map marked AFTER is from the Globalstar web site as of July 2013. It shows the coverage based on the 8 first-generation satellites launched in 2007 and the 24 recently launched second-generation satellites.

Ten Advantages of the IsatPhone PRO

At approximately 7 pm CST on June 30, 2010, Outfitter Satellite had the privilege of activating the world's first commercial Inmarsat GSPS SIM card and making the world's first commercial GSPS call. In the last three years, the IsatPhone PRO has proven to be an effective, reliable, and popular satellite phone for our clients. If you are a Globalstar satellite phone user seeking an alternative, here are some of the advantages of the IsatPhone PRO relative to the GSP-1600 Globalstar satellite phone: 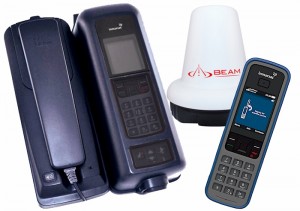 The BEAM IsatDock MARINE for the IsatPhone PRO satellite phone gives you the benefit of an external mast antenna up to 50 meters from the docking station. It can also be connected to standard corded or cordless phones.

*LIMITED-TIME OFFER: The equipment and service prices are valid for all new IsatPhone PRO purchases made before November 1, 2013. All monthly service fees, prepaid voucher fees, an airtime usage rates are subject to USF fees and other fees and taxes in addition to the prices and rates shown. The GSPS North American Plans are optimized for for a Home Zone region which includes the continental United States, Alaska, and Canada and up to 12 nautical miles off their coastlines. On these plans, Basic Rate calls include all voice and data calls made from the Home Zone to fixed public switched telephone numbers or cellular numbers. Other types of calls are at different rates. Please refer to the service contract for complete rates, terms, and other details.
Share |
Previous Post
Next Post
Blog Home
Tweets by SatPhonePro