Satellite Phone Providers - Which one is the best?

Posted by OutfitterSatellite on 1/20/2013 to Globalstar Satellite Phone
Satellite phones are increasingly indispensable during regional emergencies. Terrestrial communication networks can become disrupted by a regional crisis -- crippling the communications between local police, fire, and medical organizations. A disruption can be caused by physical damage to the network or simple network congestion due to high regional call traffic by the general population. During the recent Boston bombing, for example, the local cellular networks were almost immediately congested. 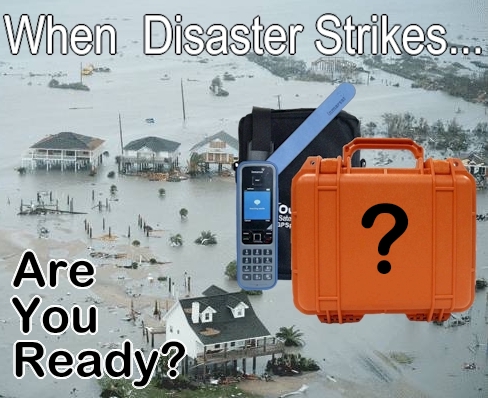 As a result, well prepared emergency response organizations now routinely depend on mobile handheld satellite phones for backup communications during natural or man-made disasters. A satellite phone almost assures a connection to other emergency services and government agencies.

An emergency response organization must keep most or all of its satellite phone fleet active year round to be instantly ready for any potential disaster. In a time of governmental budget cuts and sequester reductions, maintaining these large relatively idle satellite phone fleets is expensive. Keeping service fees to a minimum is becoming a preeminent concern. Mobile satellite phone providers are responding to that need.

Emergency response organizations in the US have many mobile satellite phone providers to choose from, including: Iridium, Globalstar, and the relatively new Inmarsat Global Satellite Phone Service (or GSPS). Which one is the right choice for your organization? One important first step towards making that decision is to estimate the annual operational costs for the different satellite phone services in two important scenarios. 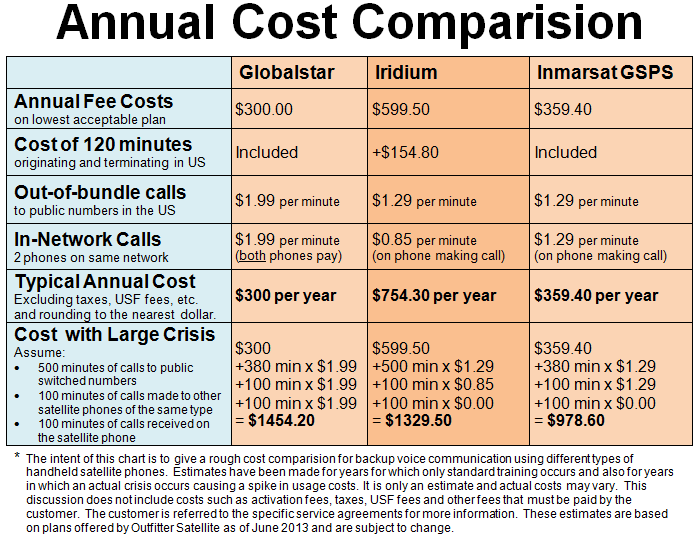 Before 2007, most of Outfitter Satellite's emergency response customers used Globalstar or Iridium satellite phones. Globalstar announced major technical problems in 2007. Even though it has recently succeeded in restoring almost normal performance within the lower 48 US states, many emergency response organizations have so far remained hesitant about returning to Globalstar. One way Globalstar is addressing this issue is by offering a very low cost emergency-use plan.

Unfortunately, if a large-scale emergency occurs, the usage costs on Globalstar would tend to significantly exceed the usage costs of Iridium or Inmarsat GSPS. There are several reasons. The Globalstar plan we considered is $1.99 per minute for out-of-bundle calls. Plans with lower per minute rates exist but these plans jettison most of the annual service fee advantage. Finally, unlike the other two satellite phone services, Globalstar charges for receiving inbound calls that are dialed directly to the Globalstar mobile number.

Iridium is currently building its second generation Iridium NEXT satellites, which they expect to put into orbit between 2015 and 2017. The significant expenses of this effort may explain why Iridium monthly fees have increased markedly in recent years. Though Outfitter Satellite offers Iridium service plans as low as $35.45 per month, most emergency response organizations choose the Iridium Standard Plan because of its more moderate per minute rate. As the comparison chart shows, the annual operational cost of an Iridium satellite phone that is kept active year round but lightly used is roughly twice that of a Globalstar or Inmarsat GSPS satellite phone. Fortunately, an Iridium phone's usage cost in a major disaster is much more competitive.

Our recommendation for US-based emergency responders is Inmarsat GSPS. There are a number of reasons for this. In addition to relatively low hardware costs, Inmarsat GSPS has near-global coverage excluding the polar caps. This makes it suitable for emergency responders that travel globally. Terrain masking of the Inmarsat I-4 satellite that GSPS uses can be a problem in extremely mountainous areas if the satellite providing coverage in the region is low on the horizon, but the satellite elevation angles in the lower 48 U.S. states are relatively high. Call drops are extremely rare even during long duration calls.

As the cost comparison chart shows, an organization converting its satellite phone fleet from Iridium to Inmarsat GSPS can reduce ongoing monthly service fee costs by almost 50%. Furthermore, the operational cost of taking an Inmarsat GSPS satellite phone to a major crisis is easily the lowest of all three mobile satellite services.

Most emergency response organizations acquire handheld satellite phones primarily for backup voice communications, but other mobile services are increasingly in demand. The feature sets of current-model satellite phones lag significantly behind those of modern smart phones, but short messaging, email-to-text, and internet capabilities are available. GPS and Bluetooth features exist on some satellite phone models, too. The chart below gives a quick overview. This overview is based on the same rate plans for which the operational cost was previously compared. 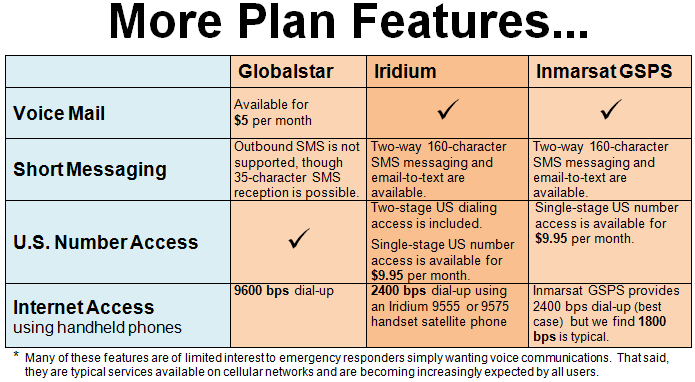 Clearly, the internet speeds for these mobile satellite phones are suitable only for light internet use applications. Specialized email software optimized for mobile satellite services is available and includes aggressive compression and crash recovery capabilities. Unfortunately, to send a one megabyte file attachment via email would take an hour or more on either an Iridium 9555 or Inmarsat GSPS satellite phone. By comparison many terrestrial cellular networks could transmit the same file in less than 15 seconds. Fortunately, emergency response organizations needing mobile satellite internet have broadband choices.

Inmarsat Broadband Global Area Network (or BGAN) which provides up to 492 kbps has the most powerful mobile broadband capabilities. This can be achieved using a lightweight portable terminal or a vehicle-mounted system. In addition to fast internet, voice and fax services can be supported. Permanent all-weather antennas with long-throw antenna cables are available for selected BGAN models, meaning BGAN is also suitable for fixed-site command centers. In late 2013 or early 2014, Inmarsat expects to launch a new land portable service called Inmarsat Global Xpress (or GX) that will offer global Ka-band VSAT with speeds up to 4 Mbps, but these systems will be much heavier and more expensive than BGAN terminals.

Typically, organizations that have selected Iridium as their mobile satellite provider use Iridium 9555 or legacy Iridium 9505A handheld satellite phones. The Inmarsat IsatPhone PRO is significantly lower in cost than its Iridium counterpart, and Outfitter Satellite currently offers trade in programs for the Iridium 9505A and Iridium 9555 so that the upfront cost of converting a satellite phone fleet from Iridium to Inmarsat GSPS is limited and the emergency response organization is able to benefit quickly from the enormous reduction in monthly fee cost on Inmarsat GSPS.

A command center may use a BEAM RST-100 (Iridium) or BEAM Terra 400 (Inmarsat GSPS). Antenna cables are available for these satellite terminals so that the external antenna that is mounted outside the command center can be remoted a significant distance from the indoors equipment. The emergency response organization should choose command center satellite terminals that use the same mobile satellite provider as the handheld satellite phones that are provided to their field workers so that calls between them are kept in-network. Cross network calls, e.g. Iridium to Inmarsat or Inmarsat to Iridium, are typically prohibitively expensive.

The Iridium OpenPort was originally designed for marine applications, but in June 2013, it was approved for land use. The Iridium Pilot terminal, which uses Iridium OpenPort service, can achieve data speeds of up to 134 kbps, and like other Iridium systems, it can function globally. Unfortunately, the monthly fee cost of this high speed internet service is not suitable for most emergency response organizations. Iridium Pilot still may have an important role for some emergency response organizations. This is because Iridium OpenPort plans in which the maximum data rate has been capped to 32 kbps are remarkably inexpensive. Since the Iridium Pilot has 3 voice lines, the cost per voice line is attractive from both a hardware and monthly fee standpoint for in-building command centers. Another positive feature for command center applications is that Iridium Pilot accepts up to 50 meters of antenna cable between the external antenna and its indoor unit.

*Notes: This article assumes prices for satellite phone hardware and service that existed as of June 2013. All rates and prices are subject to change in the future without notice. Customers interested in trading in Iridium 9505 or 9555 satellite phones towards the purchase of a new Inmarsat IsatPhone PRO should contact Outfitter Satellite at 615-889-8833 for details. Trade in programs discussed in the article can end without notice.